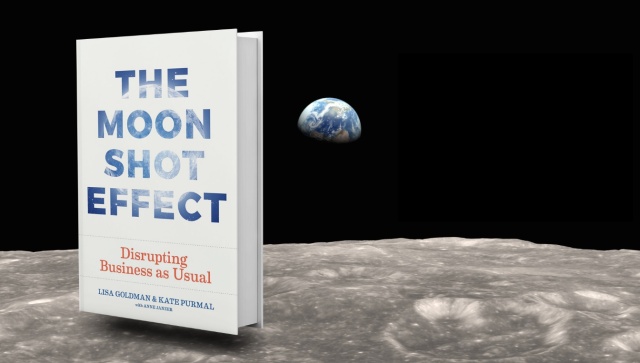 I’m excited to announce that my latest book, The Moonshot Effect, Disrupting Business as Usual, just “hit the shelves” on Amazon.

Many people have asked how the book came about. Here’s the story.

My co-author, Lisa Goldman, and I are long time collaborators. We met and served on a board together more than 15 years ago, and have worked together in various capacities since then: she was my executive coach and advisor when I first became a CEO; she and I served as President and Vice President for Women in Consulting, a non-profit professional organization in Silicon Valley; and we have consulted together on numerous strategy projects with C-level executives and their teams.

Our clients have often asked us to write a book about the leadership practices we bring to their companies and teams, but the prospect of that was daunting. Then one morning a few years ago the concept of publishing a book not only seemed possible, it was so compelling that we could no longer avoid the inevitable.

Lisa and I were meeting to prepare for an upcoming board meeting. En route we both happened to be listening to NPR and were enthralled by a story about President Kennedy’s decision to send a man to the moon. Kennedy’s moonshot hijacked our breakfast meeting as we dissected the initiative and drew parallels to our experiences in business.

Toward the end of breakfast, we started to count up the number of moonshots we had been involved in – and it was astonishing. Eighteen. It was then we realized that we both had a knack for instigating and jumping in on impossible projects, and that became something we both wanted to write about. The seeds were planted for The Moonshot Effect.

The book is about moonshots — game-changing initiatives that only succeed when teams and leaders abandon business as usual to collectively endeavor to achieve what to many seems impossible. Moonshots create high-performance teams, they elevate leaders, they reveal heroes, and often catapult companies and careers. Beyond the immediate impact, we’ve both seen over and over again that the true power of a moonshot is its lasting effects. Whether the moonshot is successful or not, the people involved are forever changed.

The book is full of stories of the moonshots we’ve been involved in, from Global 1000 companies to tiny start-ups, and the lessons we’ve learned along the way about extraordinary leadership and teamwork.

We hope you enjoy the book, and we would love to hear about the moonshots you’ve been involved in, and their effects they’ve had on you and your career. We’ll both be blogging regularly about best practices for moonshot success as well as examples of individuals and companies who have taken a shot. Please share your thoughts with us.

Kate Purmal and Lisa Goldman are the co-authors of The Moonshot Effect, Disrupting Business as Usual. The book is now available for purchase in hardback and e-book formats on Amazon.

This entry was posted in Uncategorized. Bookmark the permalink.